The Thatcher Brook Watershed (also known as the Thacher Brook Watershed) includes a diverse and complex mix of land uses comprised of dense residential, agricultural, public/non-profit and forested land. Approximately 2.75 square miles of the 7 square mile watershed is classified as a "regulated area".

Upper Thatcher Brook begins in a wetland area west of Andrews Road in Biddeford, then flows southeast across Route 111 into the Town of Arundel and then passes under the Maine Turnpike before heading northwest back into Biddeford and crossing Route 11 a second time just east of the northbound exit ramp for Exit 32 off Interstate 95.

Richardson Brook connects with Upper and Lower Thatcher Brooks to the east of the Maine Turnpike near Exit 32. One tributary to Richardson Brook begins in a large wetland complex in the southeastern portion of the watershed and crosses US Route 1 and several commercial/industrial areas prior to meeting with Richardson Brook in the vicinity of the Eastern Trail west of Morin Street. 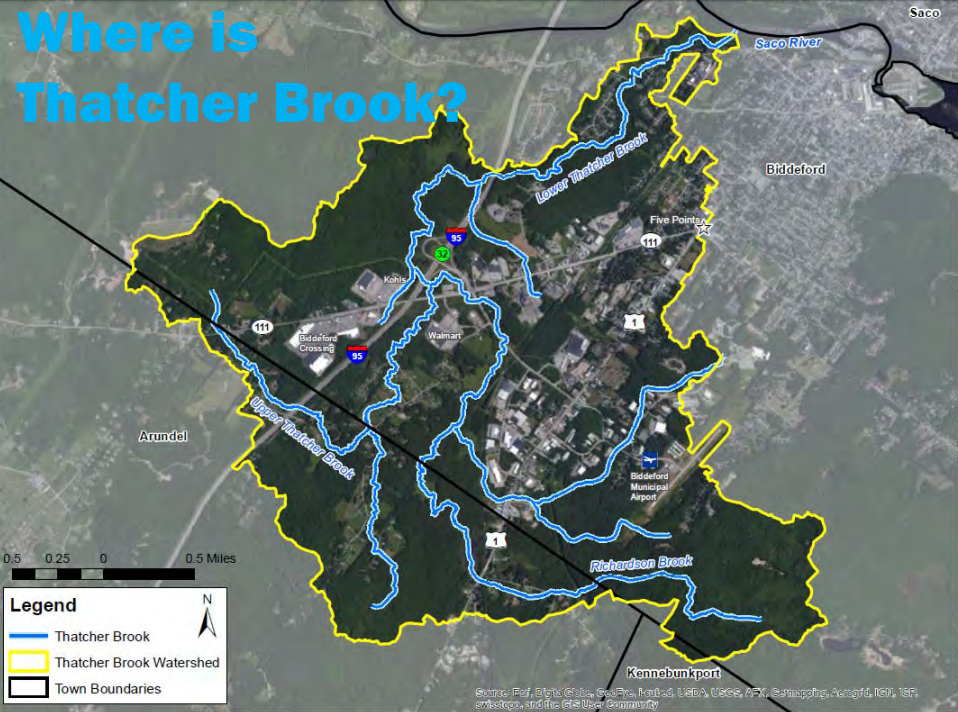 We encourage the public to review this plan (PDF) and provide comments or suggestions to the Planning Department as we move forward into the next phase of this project.

Why is a Watershed Management Plan important?

Chemicals poured down drains or put on a lawn will flush into the river. This watershed has high biodiversity and a chemical change in the water could have catastrophic consequences on aquatic life.

Chemicals that go into the Saco River disperse into the Atlantic Ocean. Some elements, like nitrogen and phsphorous, cause harmful algae blooms in the ocean (and lakes/rivers). The Gulf of Maine is the fastest warming body of water in the world. The less stress put into the environment, the better off our ocean will be.

Ecosystem services are benefits provided by the ecosystem, such as drinking water, fishing, boating, and swimming at the beach. We want to keep the Saco River Watershed healthy so that we can continue receiving these benefits.

Learn more about the Thatcher Brook Watershed in the Storymap below. All of the maps in the project are interactive and clickable. If prompted to log in, please click cancel to continue viewing the Storymap.