At the November 3, 2020 Election, Biddeford voters were asked to support two General Obligation Bonds totaling $17.5 million. The projects included in the Bond Referendum were selected to address longstanding maintenance needs for City facilities and streets throughout the community. Taking advantage of today's historically low interest rates will help save Biddeford taxpayers money on this necessary work.

The median single-family home is valued at about $227,100. About $109 of the median single family homeowner's annual property tax payment will fund these projects annually over the 20 year lifetime of the bonds.

This question asked voters to approve a $10 million General Obligation Bond to complete mandatory separation of the City's storm and sanitary sewer systems.

Biddeford’s original sewer system was a one-pipe system, meaning that the same pipe carries storm water and household wastewater from toilets, tubs and sinks. During heavy rains, the single pipe cannot handle the high volume of water and as a result untreated wastewater overflows into water bodies such as the Saco River.  The City's Combined Sewer Overflow (CSO) program creates a two pipe system: one pipe that carries the household wastewater to the treatment plant and a separate pipe for carrying stormwater.

The City's ongoing CSO work is important to reduce the level and frequency of pollutant discharges into our rivers and streams, reduce basement and yard flooding, and create a safer and cleaner environment. In fact, it is so important that it is required by the Maine Department of Environmental Protection. The projects that will be funded by this bond are outlined in the City's work agreement with the Maine DEP. This bond ensures that the City can continue meeting the mandated compliance schedule (avoiding fines and penalties).

This question asked voters to approve a $7.5 million General Obligation Bond. Of the total amount of borrowing, $3.75 million will be used for improvements to roads, sidewalks and drainage systems, and $3.75 million will be used for repairs and improvements to City Hall and other City buildings. The City Council will make the final determination on which projects will be funded within the authorized amounts.

Shall the Mayor and Treasurer of the City of Biddeford be authorized to borrow, on behalf of the City, a sum not to exceed seven million five hundred thousand dollars ($7,500,000) on such terms as the Mayor and Treasurer determine are necessary and proper pursuant to 30-A MRSA §5772, including the interest rate and the principal payment dates, the Mayor and Treasurer being authorized to execute and issue such bonds with or without provision to call such bonds for redemption, with or without premium, for the purpose of paying the costs up to $3,750,000 for improvements to roads, sidewalks and drainage systems; and for costs up to $3,750,000 for repairs and improvements to the City Hall Building and other City Buildings.

Over the past decade, the main corridors in Biddeford have received priority when budgeting for road paving projects. At least half of this $3.75 million in road improvement funding will be dedicated to addressing the longstanding paving needs on residential streets.

The City uses StreetScan, a software tool that assesses the condition of the city's roads and sidewalks and assigns them a quality ranking. According to an assessment by StreetScan, it would take $33 million to update all of the City’s roads and an additional $12 million to address sidewalk needs based on current conditions. The data and rankings from this assessment will be used as a factor to prioritize projects that will be funded with this bond during the upcoming budget process.

There is a known need of over $14 million in improvements needed to address all of the capital needs in City-owned buildings. This bond will allow the most critical of these needs to be addressed.

City Hall is the heart of our downtown district’s cultural image and its most prominent icon. Built in 1894 and designed by notable Maine architect John Calvin Stevens, City Hall is listed on the National Historic Register. The aging building needs investment in order to continue to be a safe and accessible environment for employees and community members alike.

The projects to be covered by this bond would address significant energy and safety issues in the building that have been known areas of concern for several years, including: 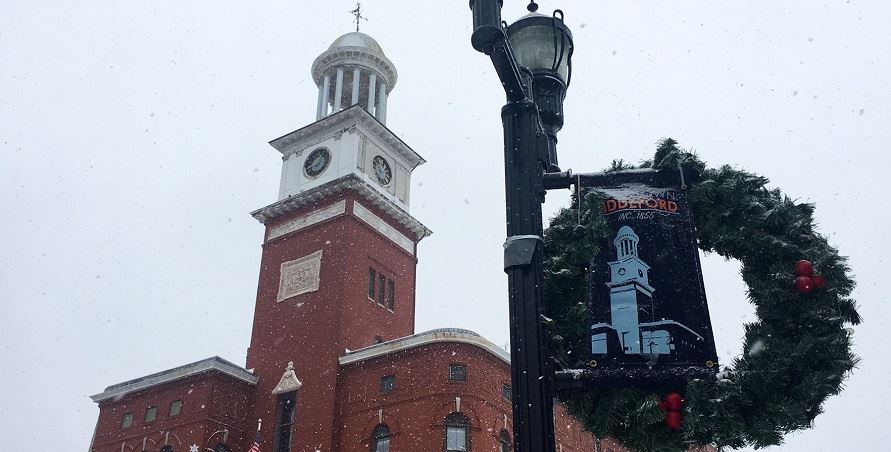 Central Station, located at 152 Alfred Street, houses the Command Staff, Fire Suppression Division, Rescue Division, and the Fire Prevention/Investigation Divisions. There is an estimated need of about $750,000 in improvements needed to this building. In addition, there may soon be demand for a Fire Department substation to address the growing need for emergency services in our community. The cost of a new substation is estimated at $2.5 million.

Biddeford Public Works, located at 371 Hill Street, is the hub of the City’s Public Works functions, including the Recycling Center/Transfer Station, as well as the home of the Biddeford School Department’s Transportation Center. There is an estimated $1.5 million in improvements needed in this building, including a second-floor addition and additional storage space.

The J. Richard Martin Community Center, located at 189 Alfred Street, was built in 1888 as a public school. The three-floor facility contains about 43,000 square feet of usable space. It serves as the hub of the City’s Recreation Department and is the home of several other local organizations, including Biddeford’s Adult Education programming and the Meals on Wheels program.

According to a 2019 study, the immediate repair needs at the facility total $2.6 million, with another $3 million of additional improvements needed to prepare the building for long-term use. 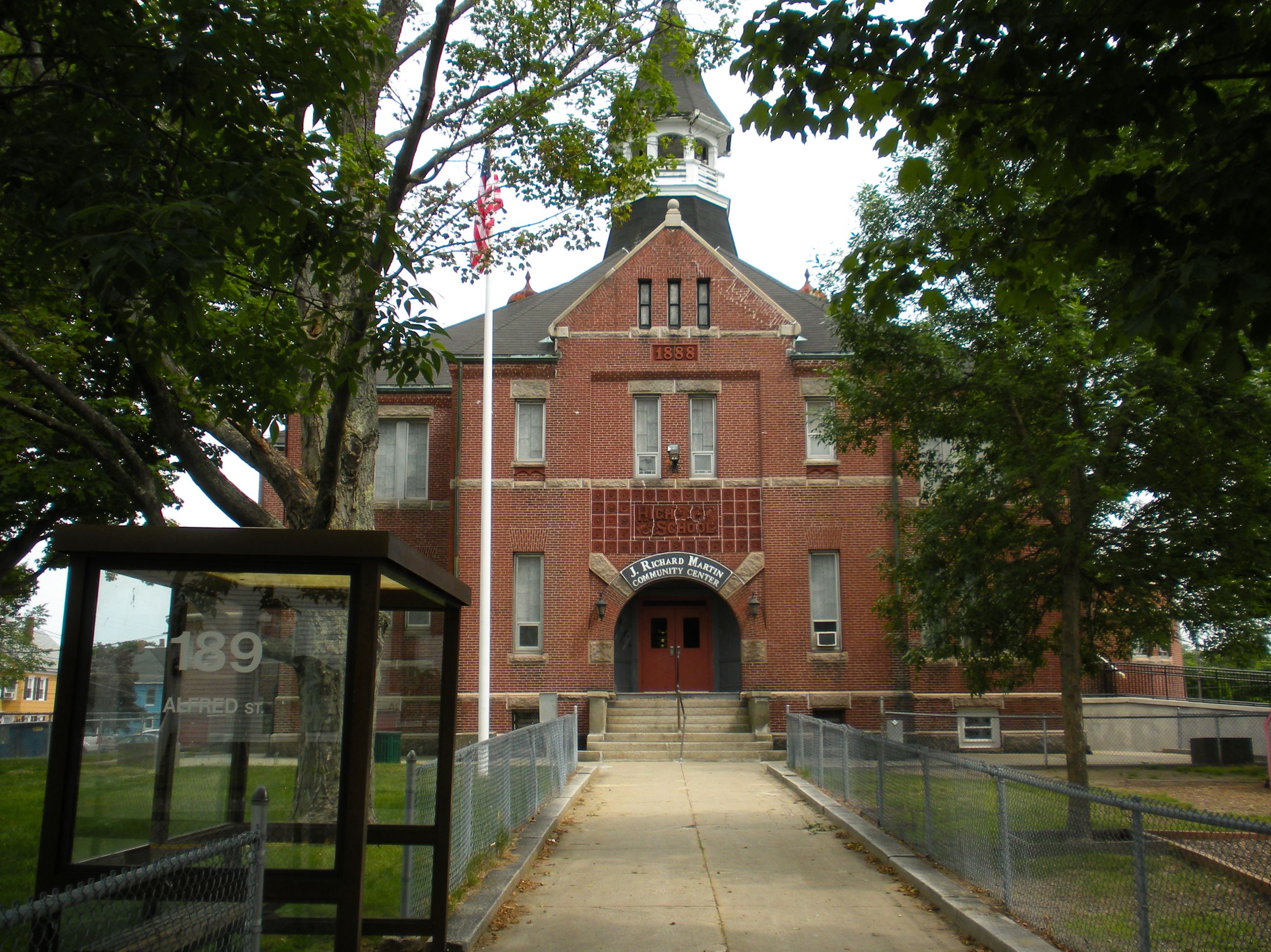 With the passage of Question 2 on the Municipal Referendum ballot, we can announce the winner of our “Biddeford’s Worst Road’ contest. With 39% of the vote, Grayson Street is guaranteed to be one of the streets that is paved with the $3.75 million in funding for road improvements. Additional roads that will be paved with this funding will be determined during the upcoming budget process. 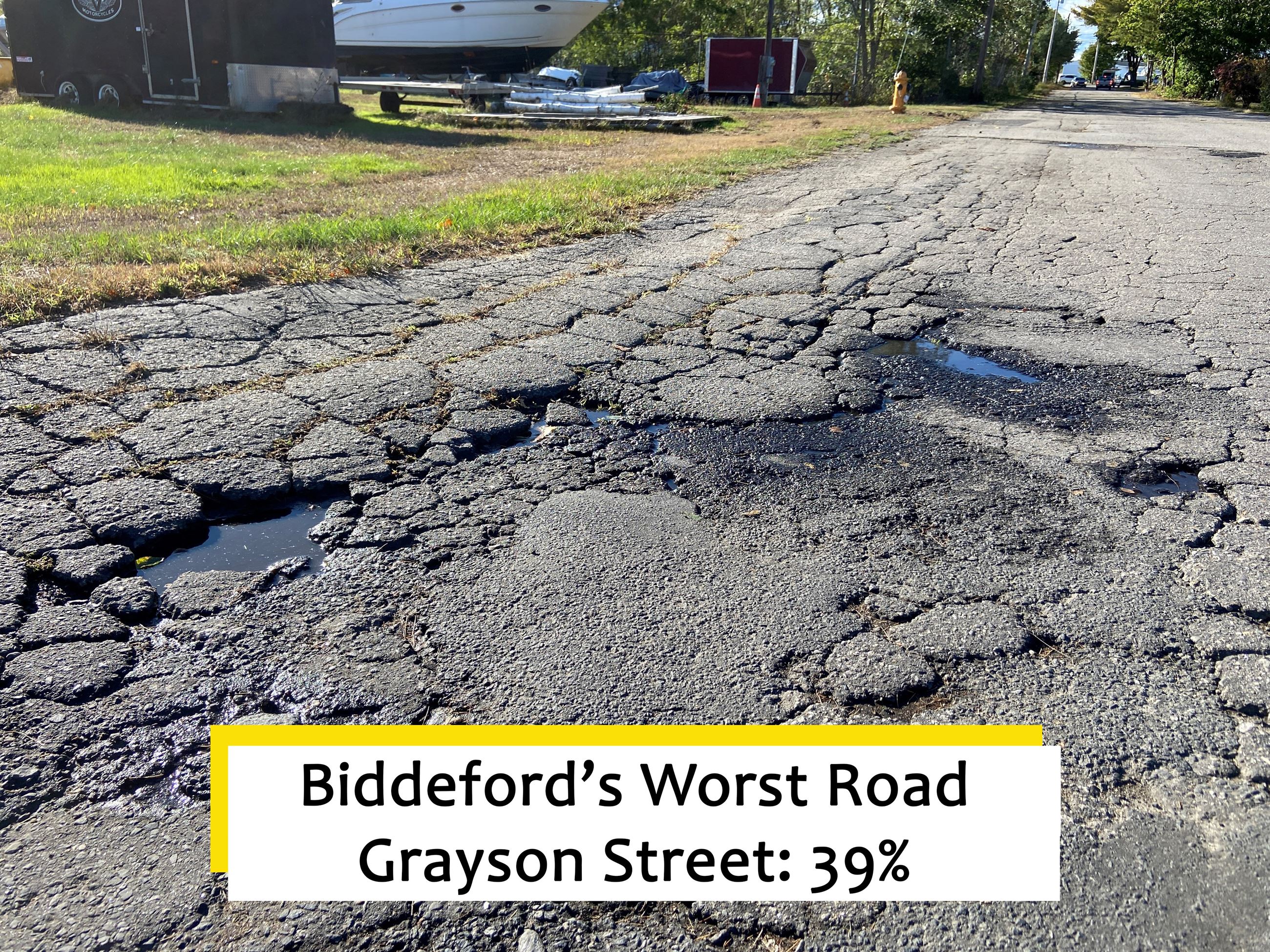 What is "Biddeford's Worst Road"? Here's your chance to select a street in the community that you would like to see paved!

If voters approve Municipal Referendum Question 2 at the November 3, 2020 Election, there will be $3.75 million in funding available to improve roads, sidewalks, and drainage systems in Biddeford. Based on a recent study of the conditions of Biddeford's roads, we know that we are in need of about $33 million in repairs to bring our streets up to appropriate conditions. We won't be able to address every street that needs improvements, so we want you to have a chance to help decide which projects to choose.

In the beginning of October, we asked Biddeford residents to nominate a road in the community that they would like to see improved. The poll below includes the five City-owned streets that received the most nominations. Please select the street that you would most like to see paved. The road with the most votes in the poll will be guaranteed to be paved if voters approve Question 2. 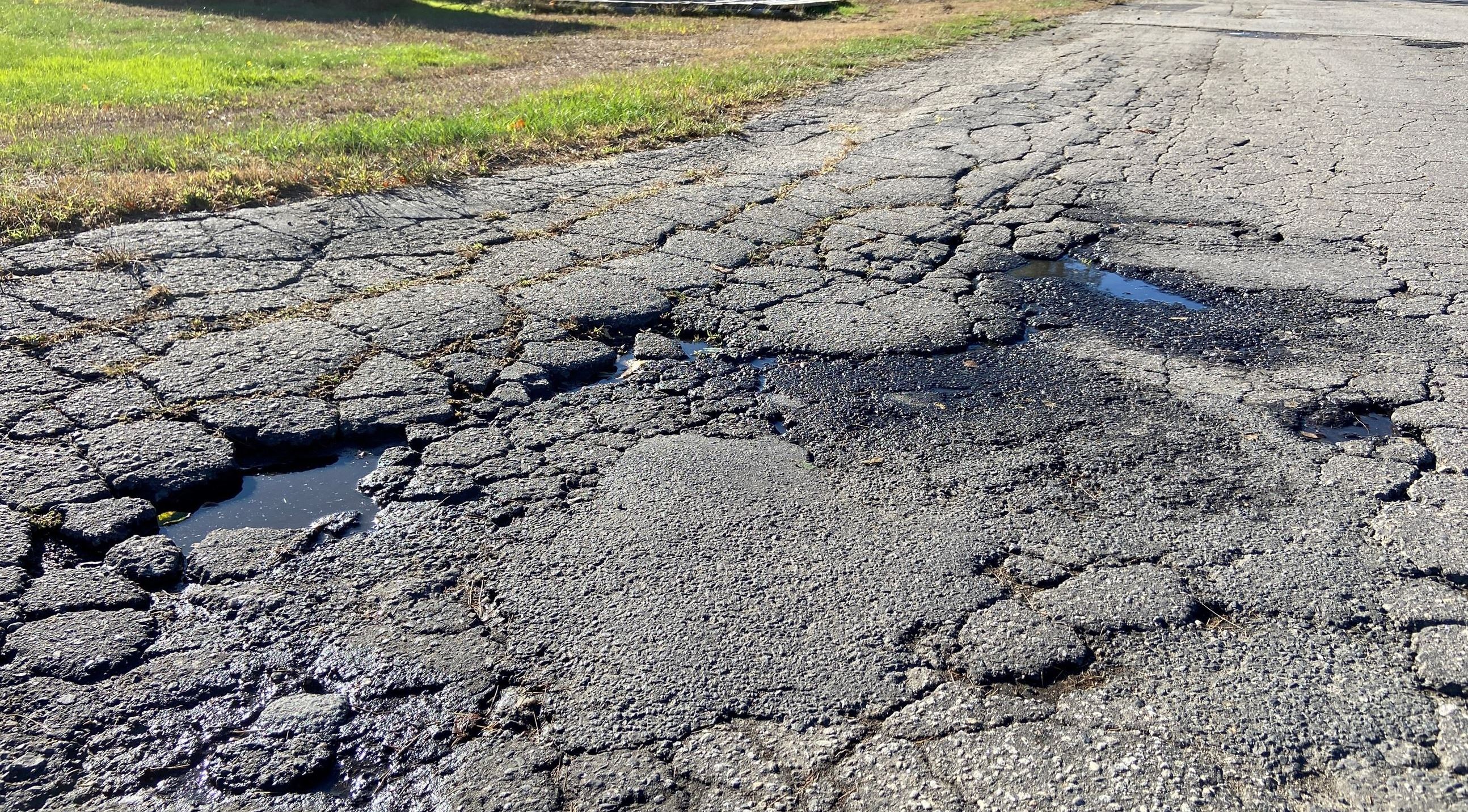 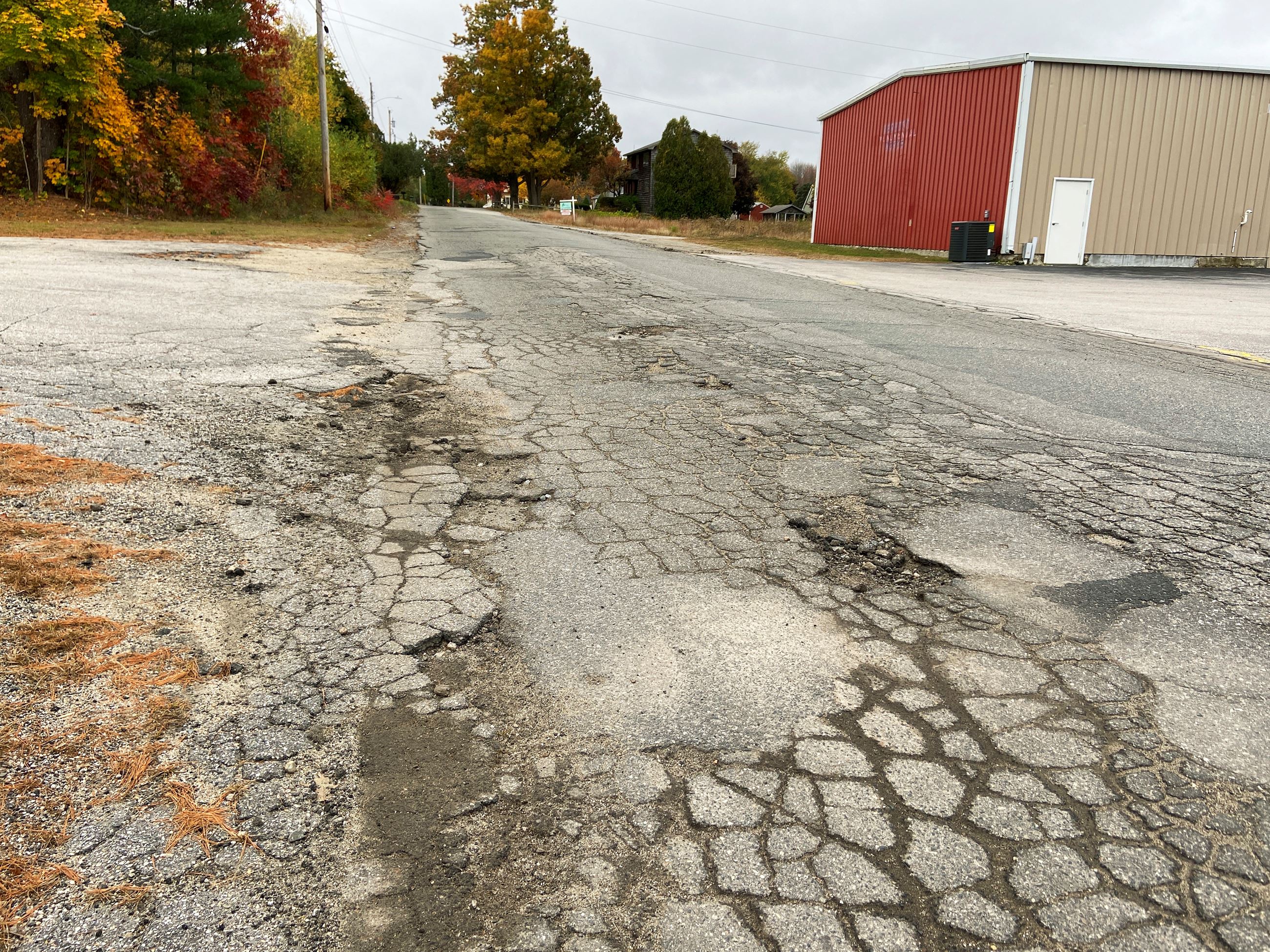 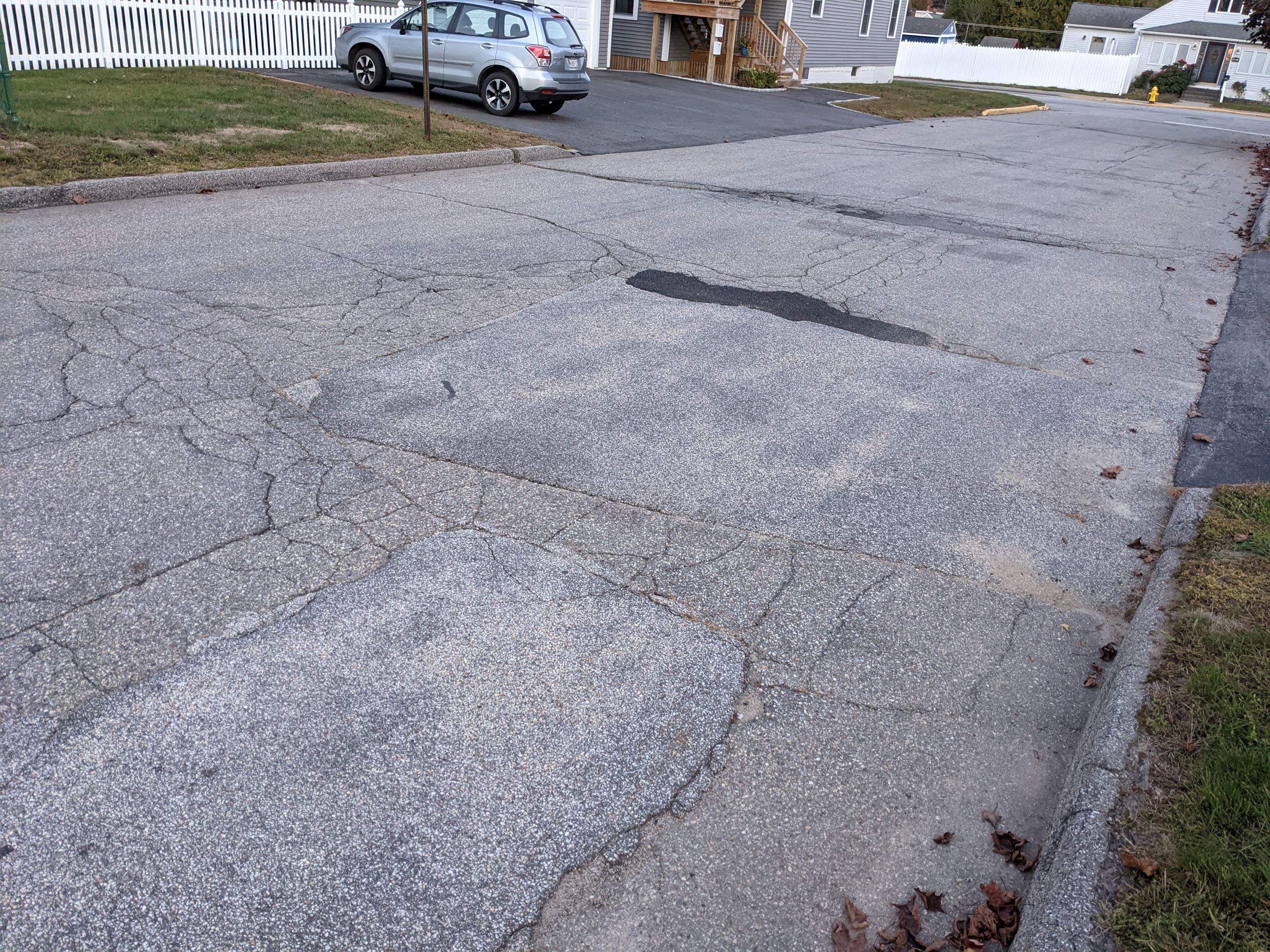 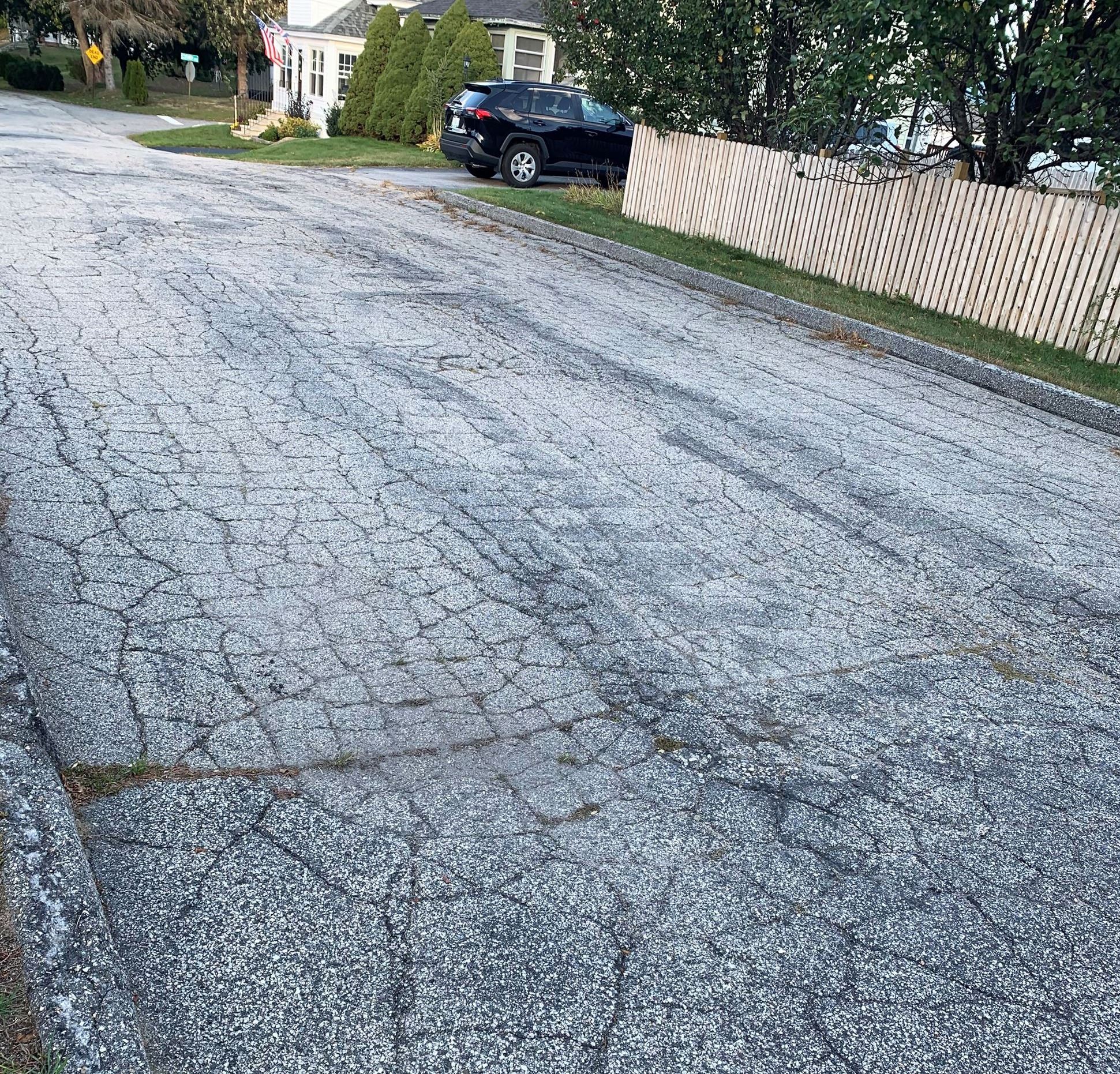 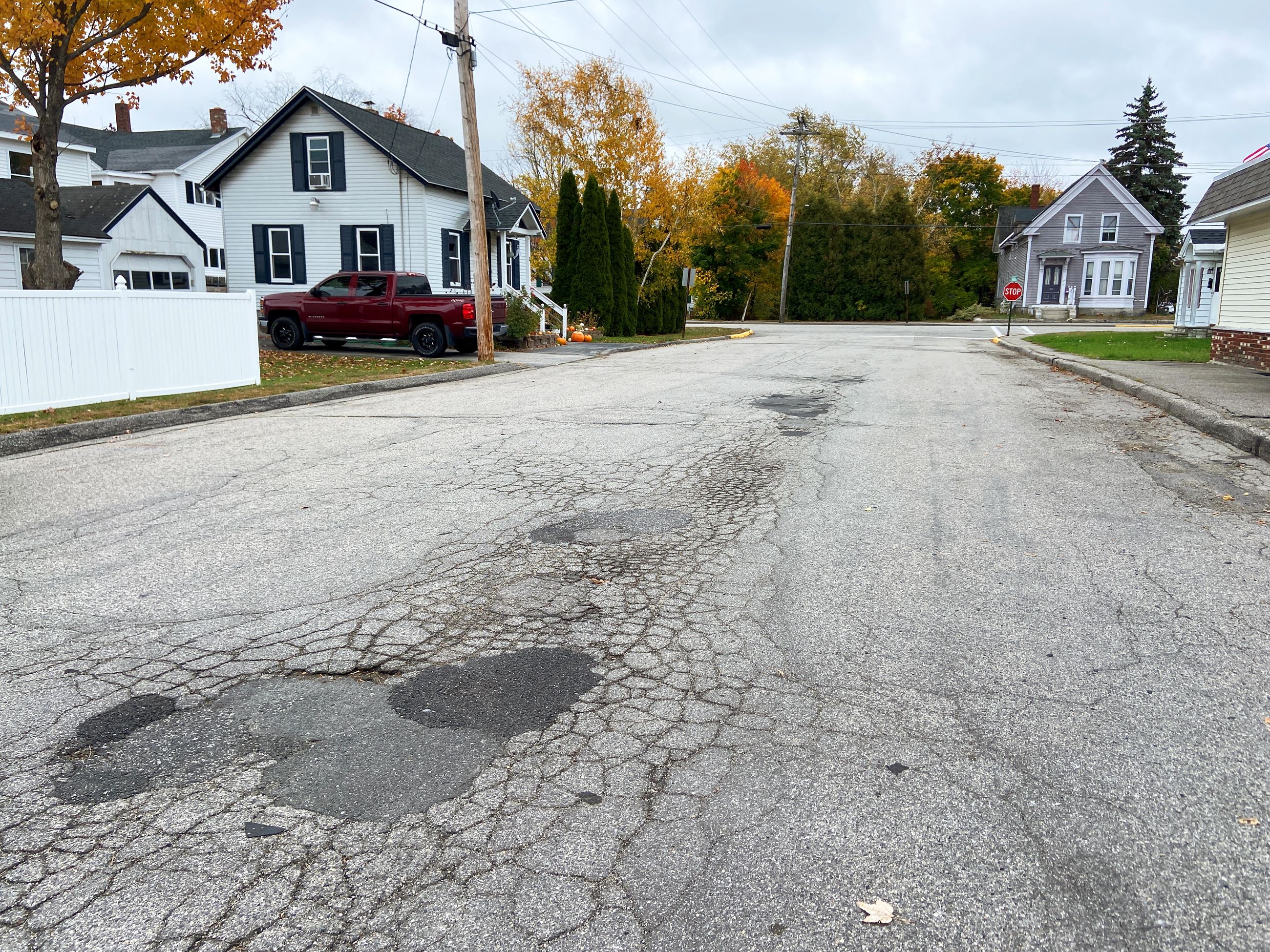 What are bonds, and why are they used?

The sale of municipal bonds is a form of borrowing that spreads the spending (plus interest expense) on high-cost construction and infrastructure projects over an extended number of years. Expensive projects that benefit the community over several years would cause vast swings in the year-to-year property tax mill rate. This borrowing is similar to an individual or family obtaining financing for a car or home to spread the cost over several years to fit within a household’s budget. This method of financing also ensures that those benefiting from the projects today as well as those benefiting in the future help pay for them.

Why were the questions on the ballot?

The City Charter requires that before any bonds are authorized for issuance that a majority of voters (during a general or special election) must ratify the orders approved by the City Council.

How long will it take to repay the bonds?

Each of these bonds will be repaid over a 20-year period.

Must the money be used for the purposes outlined, or can it be used for any other purpose?

The bond money can only be used for the specific purpose that voters approve.

What is the total amount of general obligation debt that is currently outstanding for the City of Biddeford?

Biddeford is in various stages of capital projects for which bonding authority has already been approved by voters in previous elections.

54% of the outstanding debt is for Biddeford schools, including the remaining balance owed for the Middle School construction and the High School renovation. The chart below shows a broad breakdown of the current outstanding bond and note principal as of FY20. 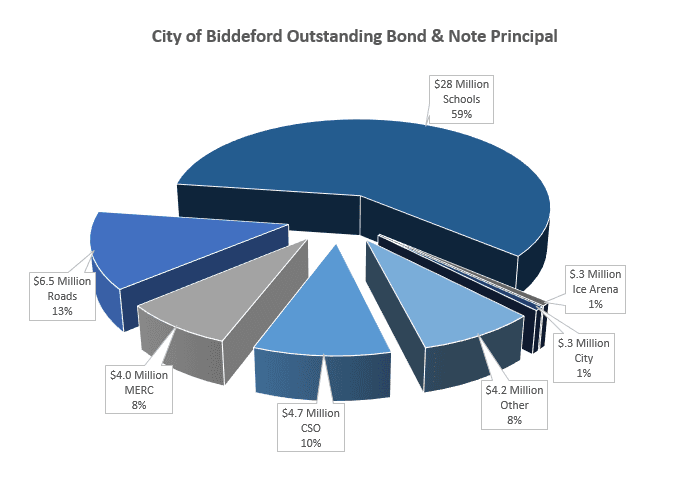 How can I learn more about the City's finances?

The City's past and current financial information, including the Comprehensive Annual Financial Reports and Budgets, can be found on the Finance and Tax Department's webpage.