The City Council passed the second and final reading of the Fiscal Year 2022 Budget at the June 15 City Council meeting. The budget that was published in the June 7 Public Hearing Notice was adjusted by $182,329.46 to add funding for four additional firefighter positions. The budget was also further amended on August 3 to reduce contingency funds by $344,492 in order to reduce to the tax rate. 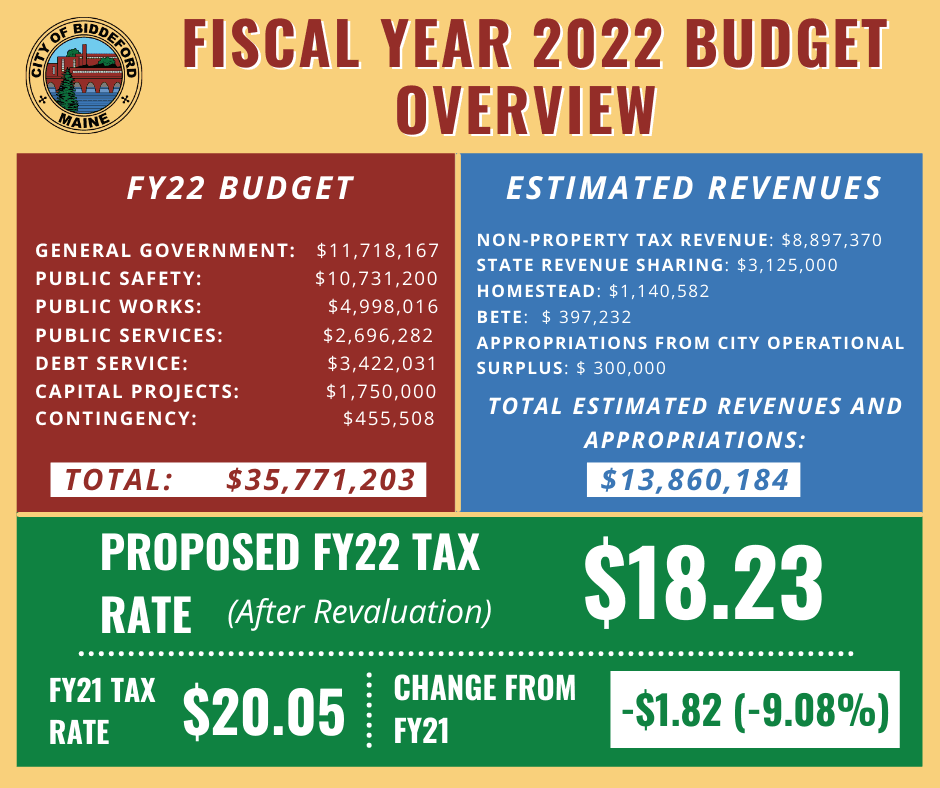 At the December 1 City Council Meeting, the City Manager presented a high-level overview of the Fiscal Year 2022 Capital Improvement Plan (CIP) budget recommendations. The CIP is a planning document, not a funding document, and will be revised and integrated into the FY22 budget at the time it is adopted.The City Council is directly responsible for over $127 million in capital assets, including roads, buildings, sewer lines, vehicles and equipment. If buildings, vehicles and infrastructure receive appropriate maintenance or upgrades on a rotating schedule, the City would need to invest about $4.7 million in its assets each year. The City Manager's recommendation for an annual appropriation goal for capital improvements is $2.5 million by FY23.The presentation included an update on the $17.5 million in bonds that were approved by voters in November. Grayson Road won the "Biddeford's Worst Road" contest and will be paved in the next year, and staff has also determined that the remaining four roads in the final round of the competition should be paved within the next year. A complete list of roads that are recommended to be paved with the $3.5 million in road improvement funding will be brought to the Council prior to the budget process. A proposed allocation of the $3.5 million in building improvement funding was also presented, which includes heating upgrades in several buildings, window replacement at City Hall, improvements to the clock tower, and a planning study for a possible Fire Department sub-station.Lastly, the Council was asked to consider the future of the smokestack on the former MERC property. Based on upcoming development projects in the area, there is a narrow window of time where it could be practical to remove the stack.