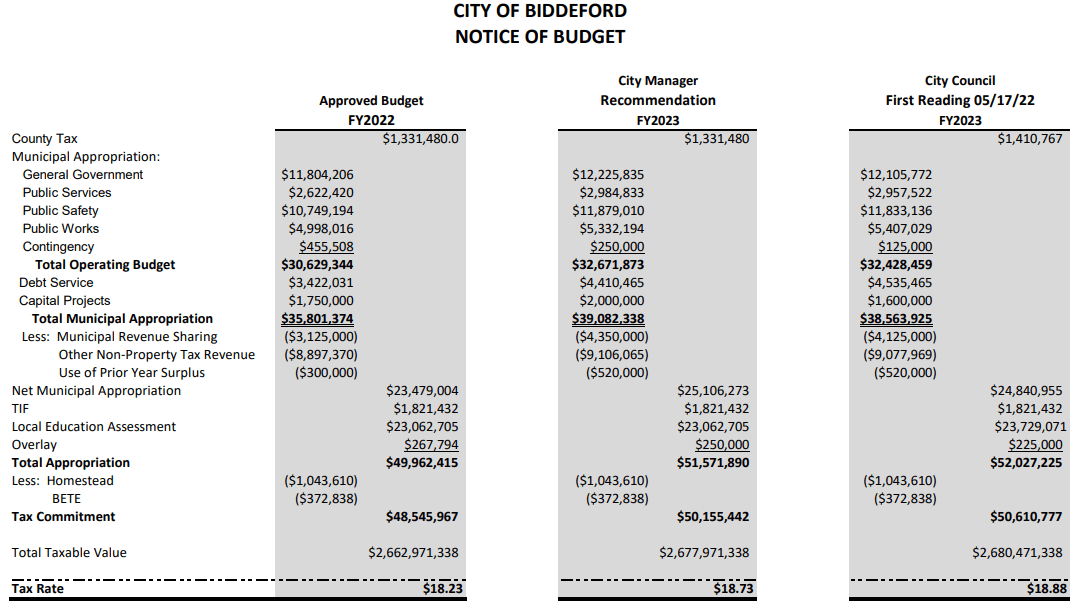 A City's budget is an expression of the community's values. Up to 2010, those values centered on community affordability, citizen service delivery, and economic development in the industrial parks. With the Great Recession and State of Maine raids on local revenues in order to balance the state budget, communities moved into economic survival mode.

The Fiscal Year 2023 Budget looks to transform operations to meet new citizen expectations while maintaining core services and being frugal in the process. 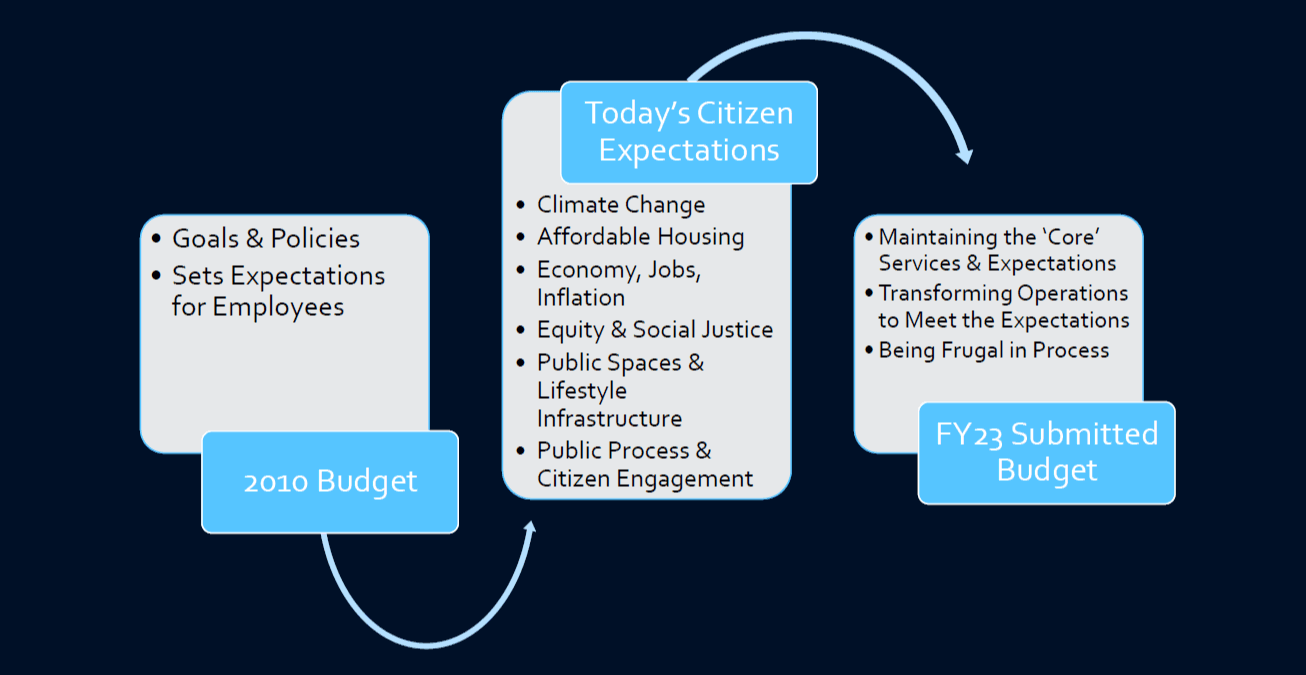 Other key factors that will impact this year's budget include:

The proposed budget as submitted has a 2.69% ($0.49) increase in the tax rate. This does not include the impacts of valuation adjustments or School or County budget impacts. At this tax rate, the median single-family homeowner would pay $64 less in taxes than in 2014. 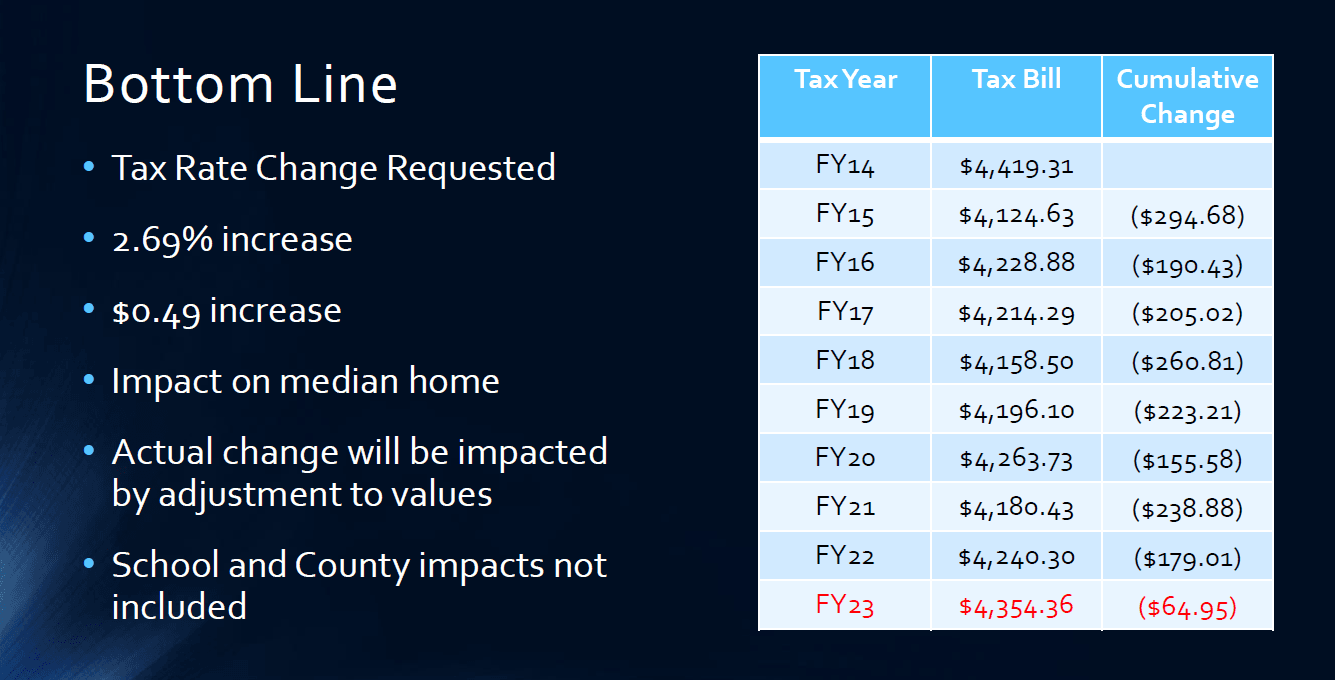 The City Manager presented the FY23 Capital Improvement Plan recommendations to the City Council on February 15, 2022. This plan is not a funding document, so it will need to be integrated with the Fiscal Year 2023 budget once the budget is adopted.
Based on historical data, the City has $210 million in capital assets, and the City Council is directly responsible for over $152 million of those assets. This number is likely significantly larger based on the economic conditions today.

In order to properly update and maintain buildings, vehicles and infrastructure on a regular schedule, an estimated $5,158,203 would need to be invested each year. Using that estimate, there is a gap of about $54.5 million over the past 13 years between the amount of funding that was appropriated due to budget pressures and the amount needed to keep up with maintenance.

The City Manager recommends that the goal for annual appropriations for capital spending should be $2.5 million. This would account for roughly $1 million for roads, $75,000 for sidewalks, about $725,000 for vehicle purchases, and $700,000 for other infrastructure items.

This year the City is expected to reach the goal of having an unassigned fund balance that totals at least 12.5% of the total budget. The City Manager recommends using the excess funding over the 12.5% to be used towards capital projects. Even with reaching this goal, the owner of the median home in the community is paying less in taxes today than they were eight years ago. 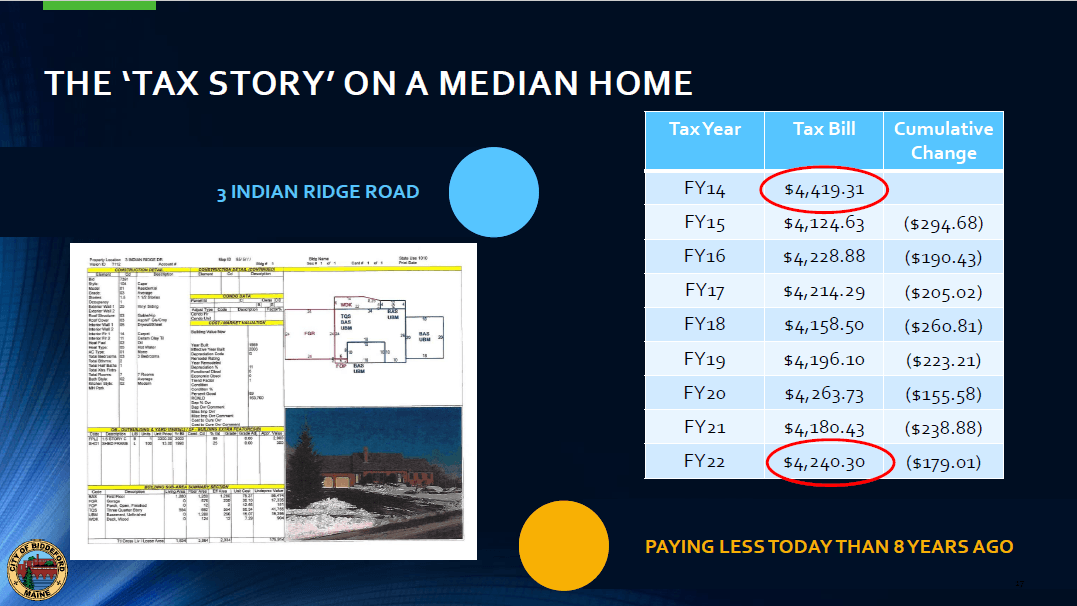 The City Manager suggests phasing in the recommended $2.5 million appropriation for capital funding over three years ($250,000 each year). This year, that would mean a recommended $2 million appropriation from the budget. There are also $2.7 million in ‘excess’ fund balance and nearly $2 million in unrestricted American Rescue Plan Funds to be considered to fund capital projects. The City Manager recommends that some of this funding is used to cover expected higher bids for existing approved projects.

The Superintendent presented the FY 2023 School Budget to the Council on March 15, 2022.

Property valuations impact state subsidies significantly. As Southern Maine home prices have surged over the past several years and Biddeford’s valuation rises with downtown revitalization, our valuation growth is at about 7% while the State average growth is at about 5%. Because of this, Biddeford schools have lost some state subsidies in this budget. The Superintendent expressed caution about future subsidy loss if our growth continues to outpace that of other Maine communities.

This year, the local share for education costs is projected at 59.12% with the state share set at 40.88%. The presentation covered the formulas for school subsidy calculations in detail.

Key cost drivers to the budget for FY23 include: